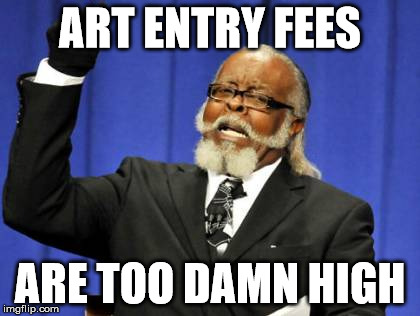 I’m sure any artist who has ever looked into entering their art into juried shows has balked at some of the prices to simply SUBMIT to have their work considered. It seriously stinks. I’ve seen price tags as high as $60 to submit TWO images! That’s how much it costs to apply to some graduate school programs! Rabble rabble, I know, but it does suck when you’re an artist without a lot of money to just gamble away on these things.

As I always do when I feel righteously indignant, I googled “art entries too expensive,” and I found this great interview with Lori Zimmer, a Brooklyn based curator, writer, and art consultant. I really agreed with what she said regarding art entry fees:

“…but to tell them oh, well, ya gotta pay me. That’s a little too greedy for my tastes. I understand that you have to pay your staff and you have to pay people to look at things, but if there’s no return, where does all that money go? If 1000 people enter and they each paid $45, where does all that money go? And then if you’re selling the work on top of that?… It just seems a little greedy to me.”

And I’m sure in some (hopefully not most) cases, the high prices being charged are not even proportionate to the qualifications of the jurors. I think that there’s an unfortunate trend where even really inexperienced curators/ galleries with really unimpressive qualifications are still demanding high entry fees simply because that’s what other juried shows/competitions that they want to compete with or emulate are doing.

I can obviously understand what is most likely the original argument for charging jury fees- that it discourages mere hobbyists or people who are less than professional from applying by requiring that entrants put some skin in the game. But I think in some cases it has the opposite effect- you get only the people who are so desperate to have their work shown somewhere that they’re willing to fork over $50 to just have their work looked at and possibly rejected. I mean, curators and other arts professionals aren’t impressed by someone with a bunch of pay-to-show vanity galleries on their resume, so why is it suddenly different when you have someone willing to pay to enter a juried group show? Professional artists are savvy businesspeople. Unless your jurors have some truly impressive qualifications, they’re not going to see the benefit of gambling away their hard-earned money just to possibly be rejected. And if they are accepted, to then have to pay shipping and insurance costs on top of the initial entry fee adds up to a lot of money invested. The quality of work received would probably be better if the entry fee were something affordable- like $5-10, or if there were only a fee to those selected.

As artists, we’re asked constantly to gamble away our money, time, and skills in the hopes of it leading to regular work, a sale, or even just nebulous “exposure.”  If an organization or gallery truly cares about giving emerging artists a chance, then they need to stop forcing them to take on all the financial risk from the get-go.

2 thoughts on “Art Entry Fees are Too. Damn. High!”