If Ico is the golden boy of gaming, then the Konami classic Silent Hill 2 is its weird, twisted, but equally brilliant cousin. The Silent Hill series (at least Silent Hill 2 and 3) is noted for its intriguing sense of atmosphere, its unique level of scariness, and especially for its use of realistic , deeply damaged characters. And they look like real people you could meet in real life! No gratuitous breast physics! 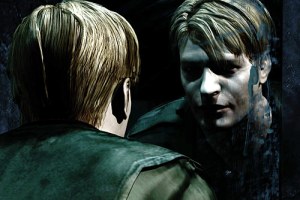 Especially not on James here.

My introduction to the series was Silent Hill 2, which centers around a man named James who is beckoned to the creepy, seemingly abandoned town of Silent Hill by a letter from his wife Mary. Problem is, she supposedly died 3 years ago. The player must control James as he explores the town looking for Mary, meeting a few interesting characters along the way, including Maria, a sexualized doppelganger of his late wife.

The whore to Mary’s virgin, as it were. This use of archetypal and Freudian elements is rife in the game, most notably in the designs of the game’s monsters, who seem to symbolize certain frustrations and repressed desires of James’s. 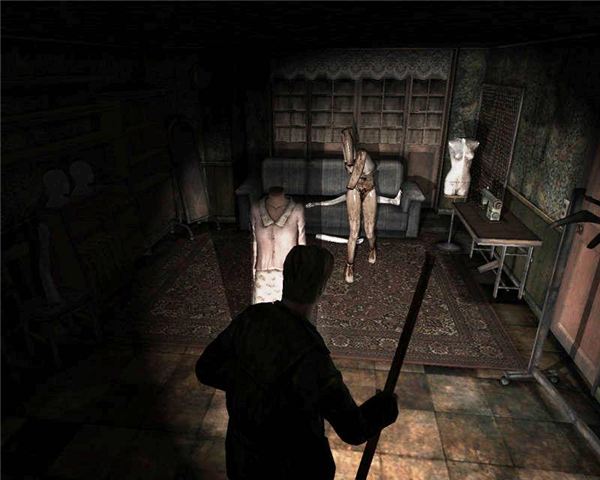 Freud would have a field day (and Hans Belmer would sue)

I don’t wanna spoil too much of the story, (even though its a very old game so its past the OMGspoilerz stage) but lets just say that James’ desire to be punished is a huge element of the game (and reason for the presence of the monsters.) In fact, the town itself is a sort of purgatory for Silent Hill‘s characters to acknowledge and be punished for their “sins.” Around the time I played Silent Hill 2 for the first time, I painted this: 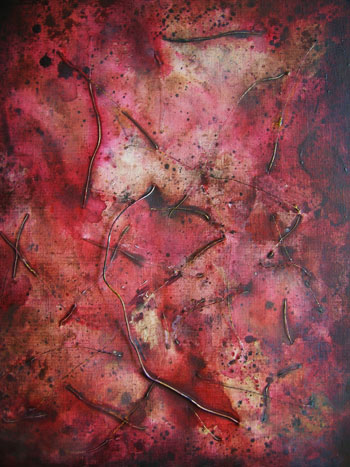 Pretty sure I did this back in 2007. Wow, that’s old. But anyway, yes, a video game directly inspired this painting. The concept was inspired by the overall theme of the game: James’ repressed desire for self-punishment, hence the wires that I actually sewed through the canvas. The color scheme was pretty directly drawn from that classic Silent Hill-esque texture of blood and rust. Pretty much every surface in the game looks like it could give you tetanus or any number of infections.

The texture and colors are also reminiscent of the fleshy monsters in the game, as I tried to make the painting look like a sort of skin.

Even though it’s old, I actually still really like this painting. The way that the wires grabbed and pooled the paint was a neat effect. It’s something that I even went on to explore further in my work.  And to think it was (partly) conceptually and aesthetically inspired by a video game! *clutches pearls*

But seriously do yourself a favor and go find a used copy of Silent Hill 2. It’s an art and or psych student’s wet dream.

Ico is kind of the golden boy of the gaming world. Whenever people on the internet want to get into an intense discussion arguing for the legitimacy of games as art, Ico is often the first to be mentioned. And it’s no surprise, given that this is how it looks: 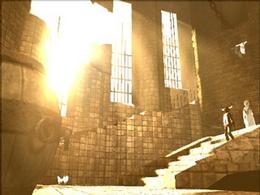 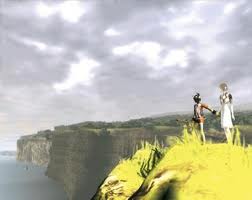 The story, gameplay, and music are elegantly simple. You play as Ico, a young boy who is taken from his village to be (sacrificed? at least imprisoned) in a strange, huge castle. Why? He was born with horns.  The setting is deliberately non-specific, existing in some kind of nethertime, and the sparse dialogue is in a made-up language. Once the player helps Ico escape from his imprisoned state, he is free to explore the castle, where he quickly encounters a young girl named Yorda, who is being pursued by a group of shadow-monsters. Armed only with a stick and simple swinging motions, the player must fight more of these monsters as they guide both Yorda and Ico in an escape from the castle.

That’s basically it, as far as the story goes. But,that isn’t really it, because there’s a magic to the experience of playing Ico that is very emotionally moving to any who play it. Small details in the game, like how the player can make Ico take Yorda’s hand to lead her around the environment, create a sense of attachment to her. Many players say that in playing Ico they wouldn’t run while holding hands with Yorda, and instead chose to walk with her because they felt bad jerking her around. I did. It’s a pretty big deal when a game can make a player stop and deliberately slow down because they feel bad about jerking a character about that doesn’t even exist. And the impact is that much deeper when we’re the one in control of moving through a narrative, as opposed to watching one play out, as in, say, a movie.

So,long story short, I love Ico and around the time I was playing it, I painted this: 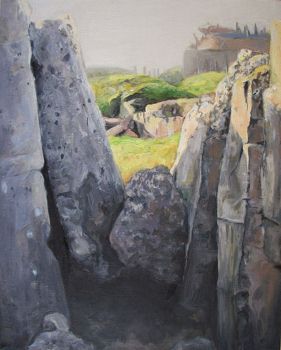 I can immediately notice the similar use of color and lighting: the bright greens and intense,glowing whites in the landscape. However, not so obvious is my use of one of the chief experiences of the game: feeling very small. In playing Ico, the camera frequently zooms far away from Ico, to where you’re overwhelmed by the enormity of the world that you’re exploring, something that games from the PS2 era frequently shied away from, adding to the unprecedented sense of atmosphere and vastness that Ico provided.

In looking for screenshots to use in this post, I even came across one that shows a striking similarity in general composition to my painting: 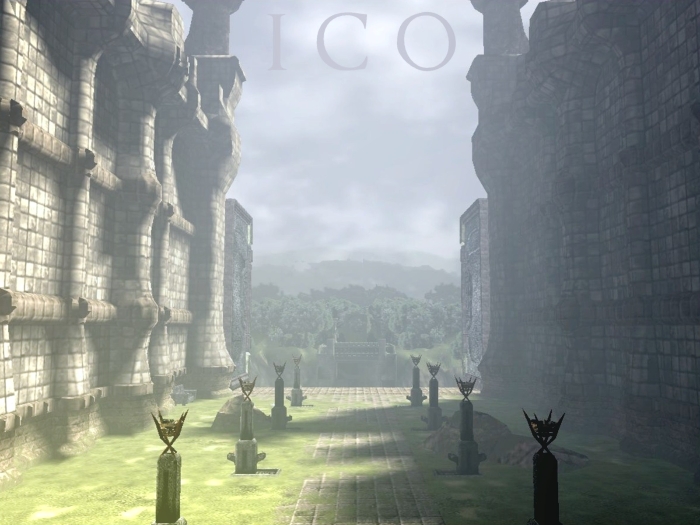 So, I’m not saying that Ico was the only impetus for this painting; it definitely wasn’t. However, I can identify the subconscious influence that that gaming experience had on what I decided to paint, and how I tend to like to depict landscapes in general. I don’t think that a painting is ever the product of a single observation/experience/etc. It’s always an amalgamation of things collected from different times, places, and experiences. And I know that a definite influence on how I treat landscape in my work  has been my experience in the rich, vast world of Ico.

‘Steps to…’ will be an ongoing series of posts in which I focus on a single painting of mine and explore a single (unexpected) influence on said work.