Ah, Kiki’s Delivery Service. Along with My Neighbor Totoro, Kiki is certainly my favorite childhood movie. I remember seeing a commercial for it either on TV or on a VHS (remember those?) and immediately demanding that we go out and rent it from the video store (remember those?!) My parents would let my sister and I take turns choosing a movie, and every time (to my sister’s annoyance) I chose Kiki– until, of course, my parents just bought me the VHS for my birthday since they’d already paid the cost of the movie many times over in rental fees by then.

So, naturally I own the Art of Kiki’s Delivery Service book from Viz. It’s filled with beautiful concept work, sketches, and commentary from director Hayao Miyazaki and others on the development of the film.

I totally recognized the above painting from its fully realized use in the film:

There are also some interesting early explorations of Kiki’s appearance: 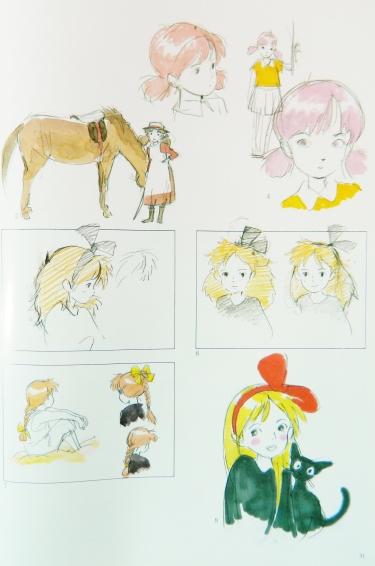 This drawing was one of my faves:

Looking back, I can see why Kiki intrigued me so much. The fully realized female characters (including the protagonist,) the story of being on one’s own for the first time and finding one’s independence, and the fact that the whole “teen witch” thing is really just a metaphor for being an artist. Kiki has a seemingly innate talent for flying on her broomstick, but gets into a funk and loses her ability. She confides in her artist friend Ursula, and realizes that she needs to find “her own inspiration” to fly. Of course, she eventually finds this inspiration and gets her “powers” back in the end through self-discovery and an act of bravery. I think it’s great that a “kids” movie explored something so complex. And it’s no surprise, being an artist myself now, that I was drawn to such a story!